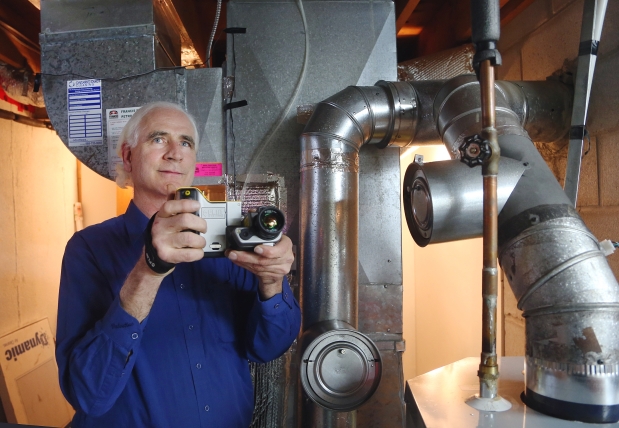 Posted at 14:59h in Blog by CapitalSiteAdmin 0 Comments

By Anita Murray, OTTAWA CITIZEN
OTTAWA — I have a confession to make. After two years as Homes editor, it’s time to admit that the beautiful homes I feature in my sections each week are about as far removed from my own as you can get.

My place is a fixer-upper, circa 1975, that was badly neglected before my husband and I moved in several years ago. And while we are slowly transforming her, it’s a long process hampered by limited funds that always seem to get eaten up by our children’s needs.

So why am I telling you this? Because I’m about to open my home, so to speak, as Ross Elliott of Homesol Building Solutions (homesol.ca) takes us through our 1,500-square-foot bungalow to give us a detailed energy audit of our very inefficient abode.

Why get an energy audit?

Quite simply, for peace of mind. That and the confidence of knowing we are getting expert, independent advice on the best and most cost-effective ways to improve the energy efficiency and comfort levels of our home.

This all came about after writer Sheila Brady wrote a story for me earlier this year on heating options that showed a huge difference in cost between heating with natural gas and heating with oil.

“The price of gas is so stupidly low right now,” says Elliott, who has conducted energy audits on thousands of Ottawa-area homes. Prices vary depending on location, but according to an Enbridge survey, it cost $941 last year to heat an average Toronto home with gas. That same home heated with oil would set you back $3,439, which just happens to be about what we’re paying.

While the cost of gas will inevitably rise, “it’ll always be cheaper to have natural gas than oil; I can pretty much guarantee that,” Elliott says. Since natural gas is available in our area, converting seemed like a no-brainer.

But was that enough of a reason to get an audit, especially since an in-depth one from Homesol would set us back $500? As Elliott pointed out, an energy evaluation would show us how we could take our 1970s house and bring it up to current R-2000 standards (if we wanted to go that far) and give us the proper sizing for a new furnace as well as advice on how to choose the right one.

“The cost of the audit is more than paid for by keeping you from wasting your money on things that don’t matter,” he says.

That made sense. We knew there were going to be other issues with our home and liked the fact that an audit would give us an objective game plan for correcting them.

Our audit took about 2½ hours and included an on-site energy evaluation with computerized modelling, testing for air tightness with what’s called a blower door test, looking for hot/cold zones and checking out our mechanical systems, windows, attic and insulation. Along with that, Elliott took the time to get a good sense of what our goals and priorities were so that he could tailor his analysis to our needs.

About a week after the testing, we were given a 30-page report detailing our problem areas, what it would take to fix them and a recommended plan of attack. We were surprised to find that before we replace our furnace, Elliott recommends we first make a few small fixes that won’t cost us much — adding attic and furnace room insulation and sealing some air leaks — but will reduce the size of new furnace we need.

Our report looks at three levels of energy savings: 25, 50 and 75 per cent. The 25-per-cent level represents those immediate fixes that will show us a huge improvement right off the bat: the insulation and air leak fixes and replacing the furnace. But the real focus is what it takes to bring our home to an R-2000 level or 50-per-cent better than the building code for new houses.

“Even though you’re not starting from regular building code, coming from where you are now to a 50-per-cent improvement, cutting your energy bill in half, that’s kind of a nice target to aim for if you can do it,” says Elliott.

Then, “probably just out of curiosity,” the report shows us how we could achieve a 75-per-cent energy savings, which is close to a Passive House level. (A home built or renovated to meet the Passive House standard uses only 10 to 20 per cent as much heating energy as one built to the 2012 Ontario Building Code.)

“Not very many people go all the way to the 75 per cent but it’s nice to know what that would look like,” he says. “There is a level of diminishing returns.”

There are currently no government rebate programs on offer for improving your home’s efficiency, but any audits registered with Natural Resources Canada could potentially qualify in future. Homesol registers its audits (with a homeowner’s consent), but does so to make sure they “continue to meet NRCan’s rigorous standards for evaluation procedures, quality assurance and accuracy,” not for possible grants, Elliott says.

He adds that there are few others performing evaluations now that rebate programs have ended, but if you’re looking for an energy evaluator, reputable ones should be able to provide you with their certified energy evaluator number, which NRCan issues only to those who qualify under its guidelines.